This is just a quick little blog posting, but wanted to show you the results of the give away last fall.  You may remember that Gina Hockett of Freestyle Elements was the winner. And boy,oh boy, did she do justice to the soup.  Hop on over to her blog and see what all she created with what I sent.


Looking at all the lovelies sure added some grace and joy to my day, as I'm sure it will to yours. Don't forget that March 30th is the first reveal of Lori Anderson's 7th Bead Soup Blog Party. Can't wait to see all the goodies. Your's truly is in the second reveal scheduled for April 6th. Until then....

A few months ago, I signed up to be part of Lisa Lodge's Sand and Sea blog hop. She sent us either a blue or brown pallette of beads to work with and I received a brown set. Now, I don't gravitate towards peaches and browns a whole lot but that's what makes being part of something like this fun and why it's called a challenge!

Here's a picture of the beads I received 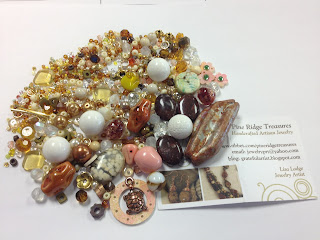 There was a whole assortment of goodies buried in there and it took some pondering to figure out which direction I wanted to go. Lisa had asked that we not go out and buy any beads, but that we use from our stash ( no problem there). After looking at the peaches and golds I added a few more things to the pot ( peach glass pearls, an old broken necklace and some gold e-beads), and here was my bead starting point: 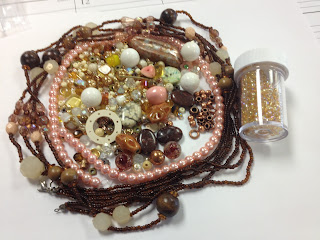 And then the project kind of took on a mind of it's own. I decided to do some wire crochet so I could use a lot of the smaller beads, but to mix it up a little I used three different colors of 26g wire: antique bronze, copper and gold. This played off of the bigger beads and the colors in the focal piece. 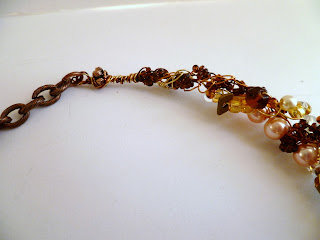 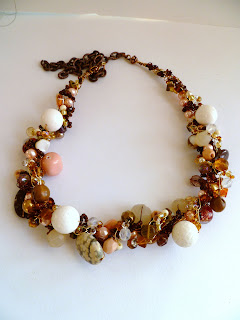 And here's my chunky wire crochet necklace. It's a little too big for me, but I've already had two people ask about buying it, and to quote a friend of mine "I've never met a chunky necklace I didn't like!"

But there was more work to be done! Originally I was going to use the focal with the necklace, but that was just wayyy too much going on. I used some 20g wire, took a deep breath, and tried my hand at some wire wrapping. That cute little turtle just had to be featured somewhere, and the copper tones played up the copper in the focal.  I also used two semi-matching beads to make matching earrings and wrapped them in a similar fashion to complement the focal bead. After they were all done, I realized that they were their own little set and didn't need to compete with the wire crochet. This is not my typical fare, but I really am pleased with the end results. 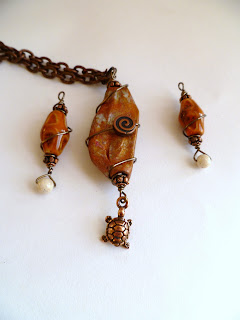 Here's another look at the earrings.... 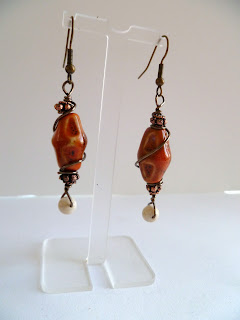 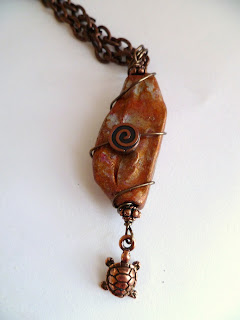 Thanks, Lisa! This was a fun challenge, and it's nice to get out of your comfort zone to see what you can create.

Here's a list of the other participants- stop by and say hi!

Tanya Goodwin, A Work in Progress

Monique Urquhart, A Half Baked Notion

Cindy Anderson Wilson, It's My Sea of Dreams

I'm off to enter goodies into the local fair- may your day be filled with splashes and dashes of grace and joy! 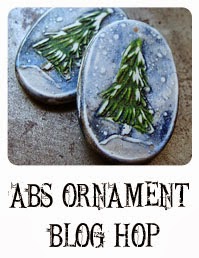 Charis Designs
My name is Christie. I'm a wife of 26 years, mom to 3 beautiful daughters, and a woman who's grateful for grace. I love making jewelry, and what started off as a hobby has grown into a business. I chose the name Charis because it's the Greek word for grace or favor, and built into the word is the concept of joy. God's grace saved me, His grace sustains me and His gift of salvation brings me great joy. It is my hope that this blog, and my jewelry, will bring you joy as well.